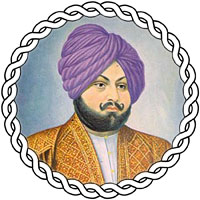 Sardar Dyal Singh Majithia the illustrious scion of Sardar Lehna Singh, one of the generals of Maharaja Ranjit Singh, was a great nationalist, an enlightened social reformer a visionary, a man of action and a great philanthropist holding properties around Lahore, believed that the salvation of the country lay in modern liberal education. To accomplish this task the bequeathed his entire property to the three Trusts. It was an act of farsightedness.

The country was passing through a dark phase of despair, despondency and exploitation and masses stepped in ignorance, superstition and obscurantism needed awakening and modern education. In his’ Will’ Sardar Dyal Singh Majithia desired that the committee of Trustees should establish a first rate Arts College with a feeding school for the dissemination of sound liberal education of a high standard based on pure morality. During his own lifetime he established a school called ”Union Academy” in the interior of the city Lahore, now in Pakistan. The committee of Trustees later decided to change the name of the school Dyal Singh High School. After his death Dyal Singh College was established by the same Trust at Lahore in 1910. both these Institutions made rapid progress and were running with great distinction till the time of partition of the country. These institutions continue to flourish under the government of Pakistan. After the partition, a school was started by the Trust in the village, Mirzajan, in Gurdaspur, Dist. of Punjab. This school was later on handed over to the government of Punjab.

Dyal Singh Trust was created through the munificence of Sardar Dyal Singh Majithia in 1898 along with two other Trusts i.e. The Tribune Trust and Dyal Singh Library Trust.

The Trust established Dyal Singh College at Karnal in the year 1949 through the untiring efforts, zeal and dedication of Late Dewan Anand Kumar, former Vice Chancellor of Punjab University and Honorary General Secretary of the College Trust Society. It is worth mentioning that at that time there was no College anywhere between Rohtak and Ambala area. By his selfless service and active co-operation of the other Trustees, Dyal Singh College has become one of the premier educational institutions of higher learning in north western India.

In pursuance to fulfill the dreams of the Great Founder, Dyal Singh Public School was established in Dyal Singh Colony in 1983. the school has established itself as one of the best institutions not only in Karnal but also in north India at the Senior Secondary Level.

It has produced students of academic excellence who are holding posts of high positions. To meet the demands of the people of Karnal another school was established in 1998 in sector – 7. This school is also functioning as a full fledged Senior Secondary School and has produced students of excellent academics and sports standards. In the year 2008, a school was established in Jagadhri. This school has now classes upto the middle school. To cater to the growing demands for excellent education, Dyal Singh Public School has been established in the historic town of Panipat also.